These photos were taken right next to the train station so the title is more than apt.

First, that moment when you realise that the tree under which you pass daily is one giant mimosa. 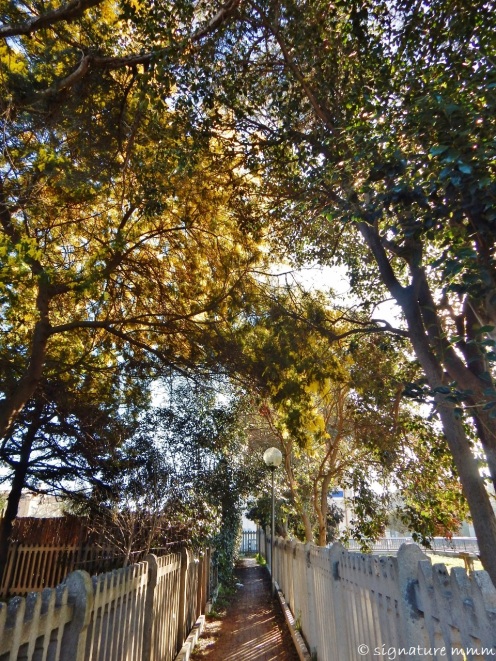 Straight and right to the trains.

All of a sudden it started to get very yellow up there.

A good photo was hard to find, too dark. 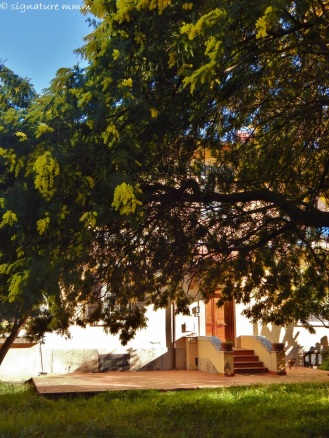 Maybe some of you remember this house as a TDS – Thursday Doors Scene.

Only when I passed it and turned around, I saw it in the bright sun.

And then comes the playground. It’s the site of “Chi entra muore” and “It’s a traaap” graffiti which I’ve posted already. I’ve been watching this wall – it’s a local tourist agency, closed most of the time out of season – for the last four years, and it’s been filling up.

A recent addition reads “Scalo Ghetto”. Right… A little sleepy Tuscan ghetto village with plenty of horses and cattle, regular busts of the station bar, and one swastika. Neither of these is a joke.

The other day I was passing under the mimosa again. It was night and bestia was leading the way. As I approached the playground, I heard music and saw two figures around a sound machine (why don’t I call it “music box” while I’m at it). In any case, the machine was producing beats and one of the guys was rapping to it. Gently, melodically, easy to do in this flowing language.

I imagined for a moment their disbelief if I told them what this middle-aged matron was listening to in her spare time.

The first concert amore ever took me to was by “99 Posse”, the hiphop gang from Naples who mostly rap in the dialect. I hadn’t known anything about them before, except that the band members met in jail. The concert was in the heart of Rome. Napoli and Roma are not the best of friends on the best of days. Still, it was a good day.

Instead of a hard-core release of deeply suppressed emotions, which I (born and bred in an environment where the only proper occasions for a man to release emotions are over sports or when drunk, usually both) always expect but Italians – be it drunk or hardcore – never deliver, I learnt of a certain protest by way of this mellow song, a cover of one you all know:

As I was wondering which train they wish to stop, amore explained that the protest was against a high-velocity train network, TAV, which they threaten to build in Italy (and probably will despite protests). I find this quite touching.

Since I’ve got mimosa lovers (as in flower, not cocktail or cake) listening to Napoli hiphop already (yeah!), let me add a couple of songs which I wish to keep right here for eternity.

First, it was another surprise when amore told me of his favourite singer and said he used to look just like him. You should see him now to know what I mean by surprise.

Here is Caparezza, who we have since heard in concert too and it was a most excellent and highly enjoyable experience, with entire families picnicking and dancing along his infectious grooves and not so slight anarchistic vibes.

This one is about the Italian prime minister of the time. Yeah, “Legalize the Premier”. In Italy, America has already happened.

Something about the Italian way of doing hiphop transports me from Italy across the Adriatic sea to the East, and what do we have there? Croatia is the neighbour, with its islands and Dalmatian coast and similar easy-going vibe, until you piss them off.

Here is a song from Split, the old port town, entitled “The City Asleep”. “TBF” (The Beat Fleet) explain how they can hear its breathing and the cries of babies reaching out for a suck.

And to finish, a song by “Elemental”, a band from Zagreb, the capital of Croatia, with a simple title: “Look at me now”. I’ll stop now and we’ll continue the next time I’m in the groove. With Bosnia.